Dunnottar Castle is structured like a little village, with 11 buildings in total, including workshops, a chapel and a gate house 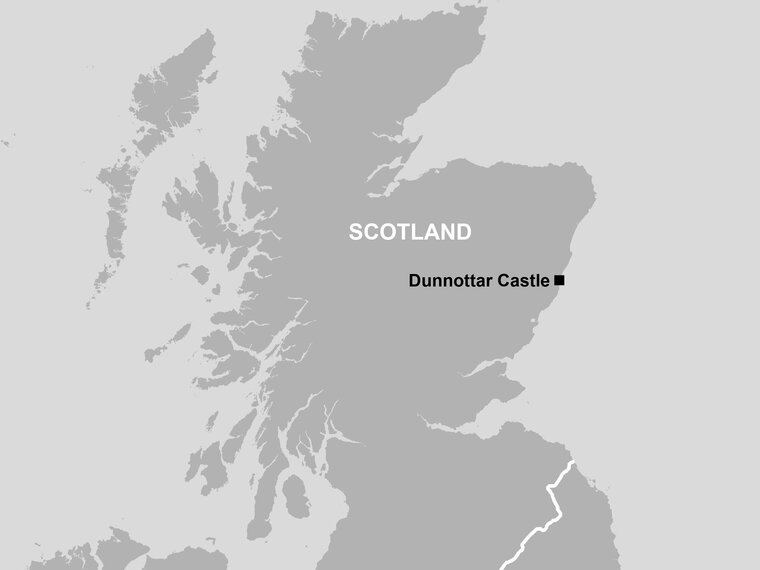 Dunnottar Castle was built between the 13th and 17th Century but even as far back as in Pictish times there stood a structure on the cliffs overlooking the North Sea, the perfect position to look out for approaching enemies

Dunnottar Castle in the past...

The first notable monarch living at Dunnottar Castle was William I, also known as „William the Lion“ (1165-1214). Curiously he had a pet lion living with him, its kennel now being called “The Lion’s Den”.

In the 13th Century, when the castle was seized by the English (as it happened many times throughout its history), William Wallace (made famous through the Hollywood blockbuster “Braveheart”), captured it back and imprisoned 4000 English soldiers in the castle’s church. It is said that he burnt them alive. Several Kings and Queens have stayed at Dunnottar Castle over the years, Mary Queen of Scots in 1562 and King James I in 1580. In 1658, during the rebellion of the protestant Earl of Argyll, over 160 of his supporters, the “Covenanters”, were imprisoned in the Whig’s Vault whilst they waited for their trial. The verdict: Protestants were not tolerated in Scotland. They were imprisoned for up to 2 months in the dungeons which measured only 50 m².

The castle also played an important role during the Jacobite uprising. The Jacobites managed to seize control of it and disarmed it of  all of its canons. This weakened the castle so much that is was dissolved in 1718.

Today Dunnottar Castle is famous for featuring in many films. It was used in “Hamlet” in 1990 and the Disney Animation “Merida- Legend of the Highlands” used it as a model. In 2013 Dunnottar Castle entered a competition for the 8th Wonder of the Earth and made 7th place. This is not surprising, considering the stunning location and how steeped in history it is.